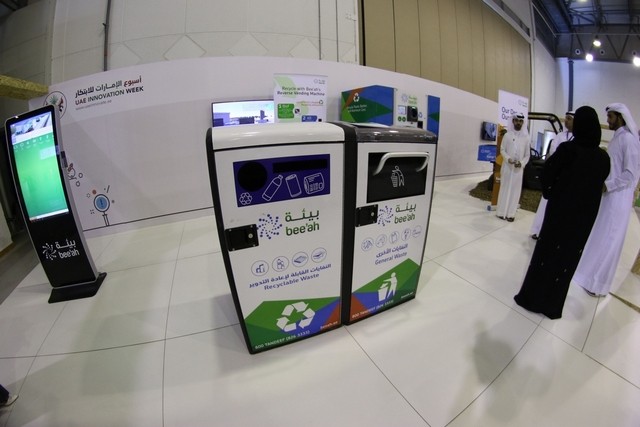 Big Belly Bins to be rolled out across Sharjah and Dubai after successful trial | The National
SHARJAH // The success of the innovative Big Belly Bins project in Sharjah will now see a rollout of the self-compacting devices across the emirate and in Dubai.

Bee’ah, Sharjah’s environment and waste management company, will be deploying another 42 of the solar-powered bins in January.

Ten of the bins, which double up as Wi-Fi hotspots, have been operating in the Heart of Sharjah since last November, which at the time made Sharjah the first location in the Middle East to have smart-bin technology.

The bins are equipped with intelligent sensors that communicate with Bee’ah’s command centre when it is full, so collection teams can come and empty it, while solar panels power a compactor, enabling the bins to collect five times more rubbish.

In August, the Centre of Waste Management Abu Dhabi announced it would spend Dh1.1 billion on a high-tech waste management system that includes Big Belly Bins .

To mark the UAE’s Innovation Week this week, Bee’ah also announced the introduction of Recycling Vending Machines (RVMs), which accepts plastic bottles and aluminium cans and separate them inside the machine before compacting the material separately.

The RVM has been deployed in Dubai International Airport and will be used in malls and public locations in Sharjah and Dubai, said Firas Wahbeh, director of marketing and communications at Bee’ah.

“We have plans to put this in the American University of Sharjah, Sahara Mall and in Dubai Marina Mall, with the aim of these RVMs being to promote and encourage recycling,” he said.

It is not just malls the company is targeting either. Rubbish left by desert campers is now being tackled by Desert Cleaning Electric Vehicles, which can carry up to 225kg and tow up to 750kg of garbage. The 4×4 buggies are operated by bin men who collect the rubbish and load it onboard.

“These vehicles are environmentally friendly. We have two operational right now and another 10 will be deployed next year,” said Mr Wahbeh.

“The aim of these vehicles is to promote awareness among desert campers, to collect their trash and clean up the area before they leave the desert to help save the environment.”

Bee’ah also showcased its mobile app, which residents can use to find recycling locations or communicate directly with the company.

“The app has several key features including the ability to find nearby locations for recycling, and upload pictures that are geographically tagged for collection requests. It also has the capability to request the collection car to dispose of big items like refrigerators free of charge,” said the director.

Fahad Shehail, Bee’ah’s chief development officer, added: “We are pleased to be collaborating with the UAE’s Innovation Week. Innovation has been the core of all our operations, which is why we are leading the way in the environmental field, not only in Sharjah but in the UAE.

“Many of our products and solutions are the first of their kind in the region as well as the world, and they have been designed to support the government’s efforts to develop an innovation-driven economy.”

Hello, please leave your name and email here before chat online so that we won't miss your message and contact you smoothly.